A bell has rung,
A Spring has sprung.
In chirp and rustle,
Hustle and bustle.
Vibrant color returns from her frosty retreat.
Awakening, urgent, emergent, in heat.
New life does fondly grow,
With fury, all alive and aglow.

The face centered cubic (fcc) lattice has two cellular automata rules that produce enough complexity to do anything useful. One of these tends to create exponential growth that expands to fill the entire universe. The 3333 rule, however, does not. It lends itself well to interesting structures, and also has great symmetry. I’m fascinated by its elegant simplicity – the only rule is that each cell is alive in the next generation if it has three live neighbors in the previous generation. You may recall that in the fcc lattice each cell has 12 neighbors.

I’ve found a lot of fascinating patterns in this automata, and will write about some of these another time. But, today being Christmas, I am delighted to present to you (ahem) this 126-cycle oscillator that looks somewhat like a Christmas tree (shown here in green, of course). This oscillator is one of the most exciting I’ve seen so far. Over 126 generations, it goes from the tree shape (seen above pointing up and to the left), through somewhat chaotic configurations, to a similar tree pointing in the opposite direction, through more chaos, and finally back to the original shape.

The easiest way to start one of these is with a planar triangular arrangement of 27 cells on each side. After 78 iterations, this configuration turns into the “tree” shape shown earlier.

After 63 more generations, it turns into a tree facing the opposite direction. After another 63 generations, we are back to the original tree shape, facing left (from this viewpoint). The complete oscillator cycle is shown here in a looping GIF animation, starting at the generation after the first tree:

And, finally, if you want to see the planar triangular shape turn into the tree, here is an animation of that process:

Recently I have been exploring polyrhythms. Polyrhythms have been used for thousands of years and are a core part of music in many cultures around the world. In Western music they are used less often. Even here, drummers will often play two or more different rhythms simultaneously, and a piano player might play triplets over quarter notes (commonly called 3 over 2).

In justly tuned music, the notes a major fifth apart are also played in the (exact) ratio of 3:2. Equal temperament, the system used in the West for about the past two hundred years, changes this and all other musical ratios to be “tempered” slightly. This makes them a bit out of tune, but because each half-step interval is equal, allows for easy transposition between keys. Just intonation uses only the pure ratios, thus trading the ability to change keys easily for a much better-sounding harmony. Choral music is often sung in just intonation, which is why the harmony that you might hear in a barbershop quartet or a choir sounds so much fuller. The notes in a just major chord have the pure ratios of 4:5:6, but an ET major chord is 4 : 5.039 : 5.993.

Because I am interested in the simple ratios of just intonation, I’ve been wondering how harmony might be seen as being equivalent to a very fast polyrhythm. Then I discovered bass player Adam Neely’s fascinating video exploring the hidden links between tempo, harmony, and rhythm. (Spoiler alert: for the TLDR version go to 23 1/2 minutes where he actually speeds up a 4:5:6 polyrhythm until it blends into a major chord! Well worth a listen!)

As Adam suggests in his video, you can write out the beats of a 3:2 poly on paper. I like to draw it out the following way, by marking the zero-modulo points with 1’s and OR’ing the resulting bit patterns:

Start counting the beats, with an index i starting at 0. The pattern at A is then equal to 1 if i is divisible by 2, and is 0 otherwise. In Javacript, we could write this using the remainder operator %:

Pattern B would be similar but using a modulus of 3. To create the combination pattern A+B, you need to take into account the length of both patterns.

I generated the 4:5:6:7 pattern experiment in Java, using the JFugue music API, with the following simple program. The JFugue API uses music description (“Staccato”) Strings, and in this language the ‘S’ is a snare and ‘^’ is a hi-hat. I use the hi-hat rather than a rest on each empty beat so that the pattern is easier to follow. See the JFugue documentation for more details on Staccato.

Consider this: for any rhythm that you could imagine, there would be a polyrhythm (many, actually) that contains that sequence. Convert the pattern to a binary format, for example 1000110111, and you can always find some values that would generate the sequence somewhere in the result. Might each rhythm pattern have a polyrhythm most naturally associated with it? This could be an interesting source for songwriting material.

Some shapes can fill space (form a “honeycomb”) with an infinite number of copies of themselves, using only coordinate translations (no rotations). The  obvious and most commonly seen one is a lattice of cubes. Another is based on the rhombic dodecahedron, which is the polyhedron corresponding to a sphere in fcc close packing (described in my last post, and seen below). You can connect as many of these shapes as you want, and they will fill space without gaps.

If a given polyhedron can fill space, that does not necessarily hold for a similarly shaped collection of spheres (and vice versa). Consider the tetrahedron. As a convex shape it cannot fill space by itself, however, a tetrahedral configuration of spheres can. This is because the shared edges and faces which would normally be infinitely thin in a polyhedral lattice will need to take up space in a close packing. After all, the “edges” in a close packing lattice are made up of spheres, not lines.

This configuration of 32 balls is made up of 8 copies of a tetrahedral ball configuration. It’s an interesting object, looking sort of like a cube but not a completely symmetric one. It also has the fcc close packing. This configuration fills space, and if you look closely you can see a Vector Equilibrium embedded in there.

The opposite faces interlock to ensure a close packing, as the following figure shows. This object is made from 8 of the 32-sphere units for a total of 256 spheres.

Another neat thing you can do with this object is to create a toroidal lattice by joining the opposite faces (you’ll have to imagine you’re doing this in another dimension, since you can’t fold the cube space onto itself in 3D). You might have experienced a similar torus world while playing a 2D or 3D video game where objects going off the screen will reappear on the opposite side. That becomes very useful when you want to run a cellular automata (CA) or another simulation in a closed universe. You can make a torus world like this of any size that you want. We’ll revisit this idea later when we explore a CA built around the fcc lattice.

This 32 sphere object, when connected as a torus, is related to the generalized quaternion group. This is also true of any larger toroidal environments made up of these.

Sphere packing in 3D has some very interesting symmetry. The Bravais lattice known as face centered cubic (fcc) is the one that I find to be the most fascinating of all the 3D lattices. This one was studied in great detail by R. Buckminster Fuller, who called it the isotropic vector matrix (IVM).

Most people think of 3D space as a lattice of cubes with XYZ coordinates, with each direction orthogonal to the other two. The IVM lattice is built differently. Instead, its core vectors are the three directions that you would move from a given point in order to form a tetrahedron (using the origin as one of its vertices). I usually think of these vectors as A, B, and C to distinguish them from XYZ (cartesian) coordinates.

In the image below, the black sphere is the origin, and the other vertices of the tetrahedron are colored red, green and blue (along the A, B, and C basis vectors, respectively).

In the lattice, there are 12 directions you can go in order to reach a neighbor cell. You can build these 12 from the three basis vectors as follows: A, B, C, A-B, A-C, B-A, B-C, C-A, C-B, -A, -B, -C. Together with the center sphere, this collection of spheres is often called the Vector Equilibrium (VE). The outer spheres have the same relationship to each other as the vertices of a cuboctahedron. The image below shows this, but a static image doesn’t give a very good idea how they fit together.

Explore further:  Open an X3D view of the VE (opens in new window).

This system helps me to visualize the relative locations better. The images here were created this way (but more on that and the IVM CA some other time). 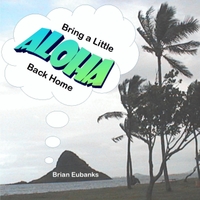 Last year I released my first single, Bring A Little Aloha Back Home. The idea for this song grew out of the fond memories that I have of  living in Hawai’i for a few years, and bittersweet memories of leaving the islands behind. BALABH expresses the hope that we can evoke the Aloha spirit at any time, and bring it “back home” to wherever we happen to be.

While I was there I fell in love with the Aloha spirit that fills the Hawai’ian islands and their people. Although it was sad to leave the place that I had grown to love so much, I remember waiting for my plane (with leis around my neck, of course!) and a friend telling me that I would bring some of the Aloha spirit with me when I left. This idea stuck with me and many years later I decided to write a song that expressed the feelings I had when I thought about my time there – the joy, the sadness, and the idea that by calling upon my experiences in Hawai’i, I could actually bring the best of the islands into my life and the lives of those around me.

Aloha is a word that doesn’t translate well – some combination of hello, love, spirit, and goodbye. The lyrics explore all of these concepts, and I hope that this music brings some of the Aloha spirit into your home – wherever that may be.

The song is also available on  iTunes, Google Music, and other music streaming and download sites.